It was a Saturday. Consensus is that this reef spot is a fun, friendly, but crowded break, especially crowded on weekends or when a swell is called. This particular morning, there was a swell called to be slowly building during the day and really showing by the evening. As it was, about two hours before the low (a bit less than two foot), there was nothing showing at first glance. However to the patient, a definite long period set would show itself every ten minutes or so, though it wasn’t breaking, just rolling through. This swell was called to be exceptionally long period though, approaching twenty threes seconds. Low tide was coming and I had faith that with the low would come surfable waves. It was just a matter of faith and patience.

One hour before low, with the sun shining and a light offshore breeze carrying the scent of the winter foliage off of the hills and onto the reef, a set showed itself inside the kelp beds and at last, one of the waves crumbled over. These rollers looked to be about shoulder to head high. Ten minutes later, two of the waves crumbled over. As the next set approached, I was getting into my 4/3 and rubbing a little wax on the deck of my 7’11” glider. I could hardly believe my eyes. I’m looking at three or four waves coming through and not a soul in sight if you didn’t count the two stand-up guys a half mile or so down the coast. 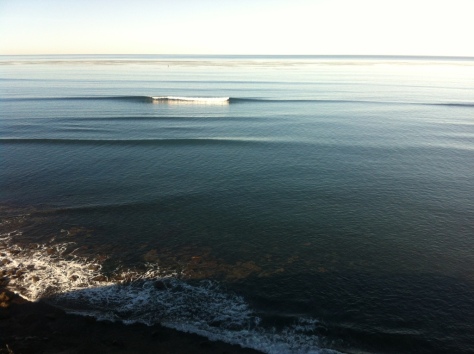 Next set comes in as I’m paddling out in the channel and I’m laughing. Nobody has decided to come this morning because of the surf report, “flat, flat” and lack of faith in the low tide and power of the magic that “long period” implies. So for the next hour, I have the place to myself. My choice of three or four waves from consistent sets every ten minutes or so. Shoulder to head high and so glassy the drops are a bit disconcerting for lack of any visual cues as to where the surface of the water might be. All I see is the grassy reef, garibaldi, and the sun’s reflection.

About low tide a couple longboarders and a stand up guy paddle out. Then a few more. Within the next hour the crowd filled out to what you might expect on a nice clean, if not overly powerful day. I’m done. I take my last wave and surf it to the inside and head for the bus wondering if the past couple of hours really happened. What a great morning. The only thing that could have made it better was one good friend to share it with. 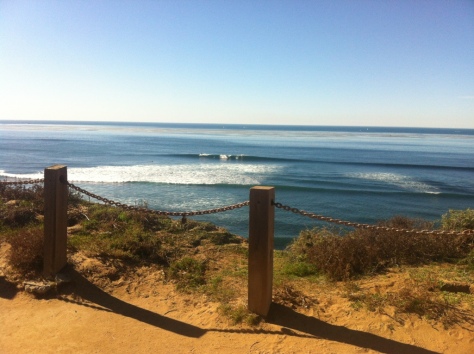 Headed out to beautiful San Diego for a couple weeks of work. Long weekends at Avalon in PB, tattooing, and weekdays up on the hill at Bing, shaping. Of course I hope to be in the water every morning!