the thing that got lost, the most important thing, eclipsing all objective considerations of quantitative accounting. style is the goodness, the heart of the matter, the thing that makes this activity more than just “practice makes perfect”. style is the dance, the groove, the sweet spot, the shiz, the mac, the dealio, the effect and the cause, the whole reason for it’s being. style 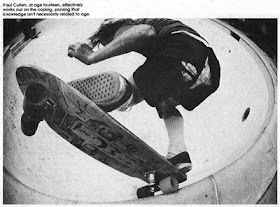 “Besides Rutherford’s crowd of “boys,”several individual researchers worked at Cavendish, legatees of J.J. Thomson. One who pursued a different but related interest was a slim, handsome, athletic, wealthy experimentalist named Francis William Aston, the son of a Birmingham gunmaker’s daughter and a Harborne metal merchant. As a child Aston made picric-acid bombs from soda-bottle cartridges and designed and launched huge tissue-paper fire balloons; as an adult, a lifelong bachelor, heir after 1908 to his father’s wealth, he skied, built and raced motorcycles, played cello and took elegant trips around the world, stopping off in Honolulu in 1909, at thirty two, to learn surfing, which he thereafter declared to be the finest of all sports.”

from “THE MAKING OF THE ATOMIC BOMB” by Richard Rhodes